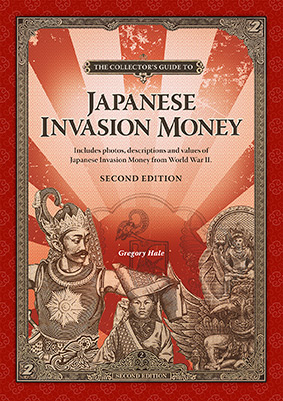 While there were only 49 primary varieties of Japanese Invasion Money (aka “Southern Development Banknotes” and, in Japan, “Military Notes of the Pacific War”) issued by occupying Japanese forces for the Dutch East Indies (Netherlands Indies, later Indonesia), Malaya, the Philippines, Burma and Oceania (intended for use in Australia and environs), and while most of the basic notes are fairly common and easy to acquire, the wartime history, the plethora of official overprints, commercial overprints, myriad block letters (as most JIM did not have serial numbers), typeface differences in block / serial numbers, color differences, circulating counterfeits, souvenir overprints, errors, remainders, reprints, replicas, fakes, propaganda versions, specimens (various versions of “Mi-hon” and / or “Specimen”), replacement notes and other varieties, make for a very interesting subject indeed.

This book is, by far, the most in-depth coverage of this aspect of World War II banknote collecting, and is half history book, half catalog. It can be used as a reference–or you can read it cover to cover.

If you are a serious collector who is trying to collect every block number and other variation, this catalog should help identify the rare from the mundane.

In general, even accounting for the pricing in Australian dollars, the prices in this catalog are significantly higher than in other catalogs, but this is an area which has been quite popular to collect, of late. What is more interesting, though, is the price spread between VG and UNC condition; most other catalogs have a fairly wide spread for this material, with UNC examples valued generally at more than 10 times the VG price.

In this catalog, the VG prices are significantly higher, but UNC is valued at just over double the VG value–if this were true, I would collect only UNC. Another anomaly, probably a result of spreadsheet rounding errors, is that there are a number of items which are valued at AUD 2 in VG, AUD 2 in VF and AUD 4 in UNC–why would anyone buy VG for AUD 2 if they could buy VF for the same price?

The extent of the research and inclusion of archive materials, including a number of contemporary newspaper articles, photographs, leaflets, propaganda material, maps and other historical documentation is laudable. It is a fascinating read, cover to cover.

A gentle warning, however: if you do buy this catalog you may be compelled to acquire the many more variations than you might have known about previously. For example, the version of Netherlands Indies Pick 121, JNDA 13-61 is in Dutch (“De Japansche Regeering” and “Tien Cent”). This catalog includes an unlisted version where the issuer’s name is in Romanized Japanese (“Dai Nippon Teikoku Seihu”) and the denomination in Bahasa Indonesia (“Sepoeloeh Sen”).

The book can be purchased directly from the author’s website.