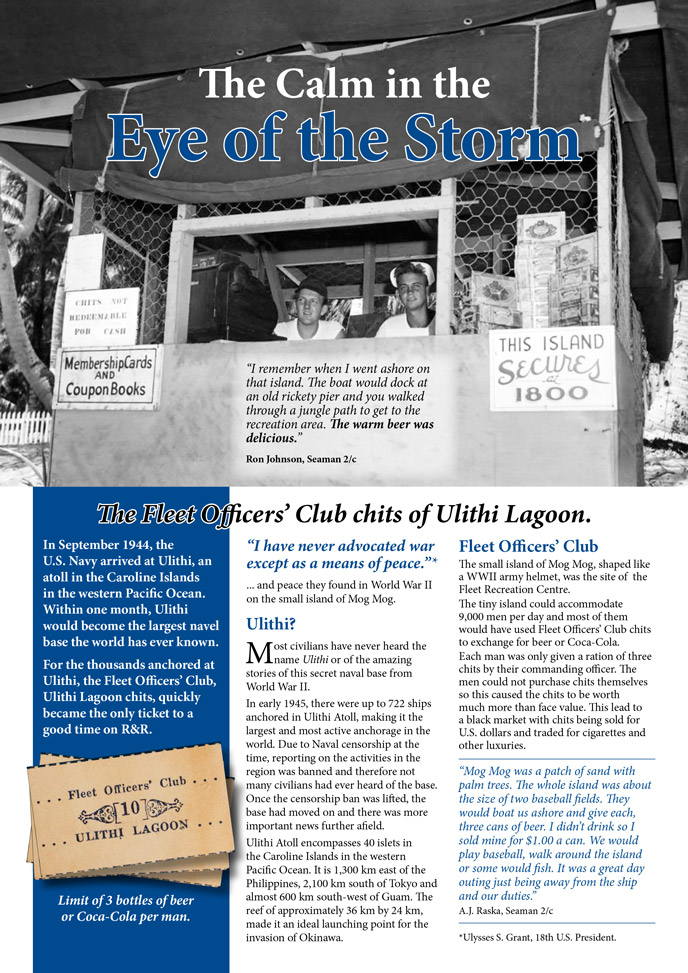 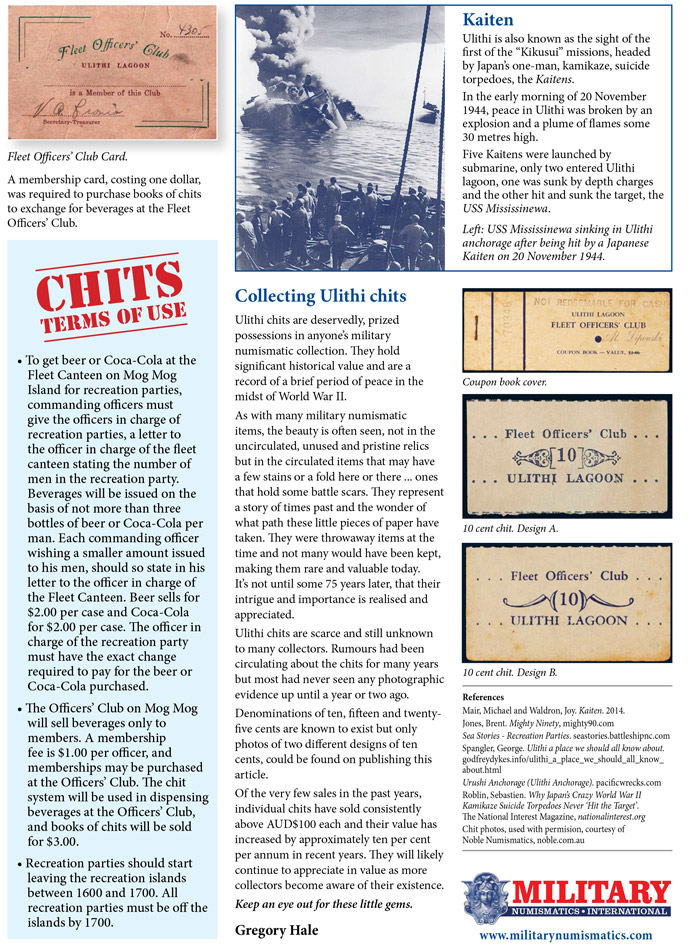 The Calm in the Eye of the Storm

In September 1944, the U.S. Navy arrived at Ulithi, an atoll in the Caroline Islands in the western Pacific Ocean. Within one month, Ulithi would become the largest navel base the world has ever known.

For the thousands anchored at Ulithi, the Fleet Officers’ Club, Ulithi Lagoon chits, quickly became the only ticket to a good time on R&R.

“I have never advocated war except as a means of peace.” Ulysses S. Grant, 18th U.S. President.

... and peace they found in World War II on the small island of Mog Mog.

Most civilians have never heard the name Ulithi or of the amazing stories of this secret naval base from World War II.

In early 1945, there were up to 722 ships anchored in Ulithi Atoll, making it the largest and most active anchorage in the world. Due to Naval censorship at the time, reporting on the activities in the region was banned and therefore not many civilians had ever heard of the base. Once the censorship ban was lifted, the base had moved on and there was more important news further afield.

Ulithi Atoll encompasses 40 islets in the Caroline Islands in the western Pacific Ocean. It is 1,300 km east of the Philippines, 2,100 km south of Tokyo and almost 600 km south-west of Guam. The reef of approximately 36 km by 24 km, made it an ideal launching point for the invasion of Okinawa.

The small island of Mog Mog, shaped like a WWII army helmet, was the site of  the Fleet Recreation Centre.

The tiny island could accommodate 9,000 men per day and most of them would have used Fleet Officers’ Club chits to exchange for beer or Coca-Cola.

Each man was only given a ration of three chits by their commanding officer. The men could not purchase chits themselves so this caused the chits to be worth much more than face value. This lead to a black market with chits being sold for U.S. dollars and traded for cigarettes and other luxuries.

“Mog Mog was a patch of sand with palm trees. The whole island was about the size of two baseball fields. They would boat us ashore and give each, three cans of beer. I didn’t drink so I sold mine for $1.00 a can. We would play baseball, walk around the island or some would fish. It was a great day outing just being away from the ship and our duties.”

Ulithi is also known as the sight of the first of the “Kikusui” missions, headed by Japan’s one-man, kamikaze, suicide torpedoes, the Kaitens.

In the early morning of 20 November 1944, peace in Ulithi was broken by an explosion and a plume of flames some 30 metres high.

Five Kaitens were launched by submarine, only two entered Ulithi lagoon, one was sunk by depth charges and the other hit and sunk the target, the USS Mississinewa.

Left: USS Mississinewa sinking in Ulithi anchorage after being hit by a Japanese Kaiten on 20 November 1944.

Ulithi chits are deservedly, prized possessions in anyone’s military numismatic collection. They hold significant historical value and are a record of a brief period of peace in the midst of World War II.

As with many military numismatic items, the beauty is often seen, not in the uncirculated, unused and pristine relics but in the circulated items that may have a few stains or a fold here or there ... ones that hold some battle scars. They represent a story of times past and the wonder of what path these little pieces of paper have taken. They were throwaway items at the time and not many would have been kept, making them rare and valuable today. It’s not until some 75 years later, that their intrigue and importance is realised and appreciated.

Ulithi chits are scarce and still unknown to many collectors. Rumours had been circulating about the chits for many years but most had never seen any photographic evidence up until a year or two ago.

Denominations of ten, fifteen and twenty-five cents are known to exist but only photos of two different designs of ten cents, could be found on publishing this article.

Of the very few sales in the past years, individual chits have sold consistently above AUD$100 each and their value has increased by approximately ten per cent per annum in recent years. They will likely continue to appreciate in value as more collectors become aware of their existence.

Keep an eye out for these little gems.

Spangler, George. Ulithi a place we should all know about. godfreydykes.info/ulithi_a_place_we_should_all_know_about.html