In early April, I attended the most unusual numismatic event on earth, the MPCFest XVII. 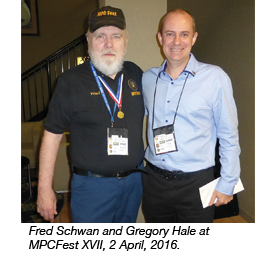 I had no idea what I was getting into when I accepted an invitation by the revered Fred Schwan, of Schwan and Boling fame, to travel one third of the Earth’s surface from Brisbane, Australia to attend the Military Payment Certificate conference in Port Clinton, Catawba Island, Ohio, USA.

Fred asked me to be the keynote speaker of the Fest after reading my book ‘The Collector’s Guide to Japanese Invasion Money’. The theme of this year’s Fest was numismatic-related items of the South West Pacific in WWII and approximately 30 presentations did not disappoint.

On arriving at the conference venue, renamed Camp Leo May, I was greeted by some of the top MPC and numismatists the world has ever seen. Fred Schwan, Joe Boling, David Seelye, Neil Shafer and Larry Smulczenski to name a few. I was in awe of the experts in attendance.

A quick introduction around the group and I went into the bourse. Numerous items for sale and I purchased personally signed copies of newly released and out-of-print numismatic publications. 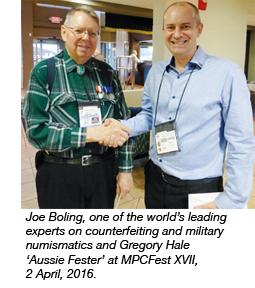 I was then approached by the elusive Kazuya Fujita. He was not registered for the conference but had been advised that I was attending and he drove four hours to meet me. He presented me a copy of his new research paper and we discussed some of his research on Japanese Invasion Money which spans more than 40 years. Kaz also raised some interesting questions which require further research, which I will keep under wraps for the next edition of my book.

After dinner, the festivities began. The conference was run like a military camp. As a new recruit, I was allocated to ‘D’ Company. My first task was to retrieve our company flag and carry to the mess hall. I was then put on ‘KD’ which I later found out was kitchen duty. I was told I would have to clean up the plates from tables and wash dishes after everyone was finished. I started to clean the tables after dinner, to the amusement of the attendees and realised they were having a laugh at my expense. The Yanks in that part of the US truely share our Aussie sense of humour and that was the start of a fun-filled and unusual weekend.

After making toasts to everyone and everything imaginable, including the Queen, we watched the first presentation and were issued with our pay for the day, in unique Military Payment Certificates. I was then roped into ‘March Madness’ a trivia contest on MPC. I made it through the first round. Then lights out.

I realised early on that this was a joke as it was snowing on Saturday morning.

0700-0800 - Chow - I passed on the white sausage gravy, the corn bread and all manner of sweet cakes, muffins and bagels in exchange for plain cereal. 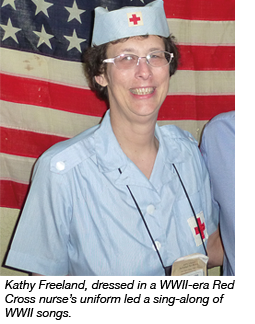 After a few presentations in the conference theme it was all in for the sing along. Kathy Freeland, co-author of American Red Cross in World War II Collector’s Guide, dressed in a WWII-era Red Cross nurse’s uniform lead the group through an old war-time sing-along.

After lunch my keynote speech was well received and they all laughed at the appropriate points. It was a daunting task presenting to my peers and world-renowned experts like Fred and Joe but in the end it all went well.

The day included some fascinating presentations including: Occupation Currency and the Press; Replacements, Reissues, or Re ‘What is’; Overstamps on JIM; World War II Indochina Coins and Notes; and Australian Defence Canteens Service Orders.
The highlight of the day was the presentation Camp Hay - not just Camp 7 but Camp 8 presented by Steve and Ray Feller. Steve spoke of their discoveries on a trip to England to meet with Alan Morgenroth, son of a survivor of Camp Hay, Camp 8.

After Chow, we had to forfeit our old military payments certificates from the previous day and were reissued with the new MPC. The highly collectable MPC are issued each year and the attendees swap and buy notes to build their collections often paying US dollars for rare and error notes.

The presentations went well into the night. It was then time for round two of ‘March Madness’. I made it through another two rounds and was presented a silver medal and was told that I went further than any other new recruit.

Not surprising, the final round saw Fred and Joe compete head-to-head. After a fierce round, Fred was crowned the world champion.
At around 11 pm the poker tournament began for the few people that could still keep their eyes open. The last Festers went to bed around 3 a.m. 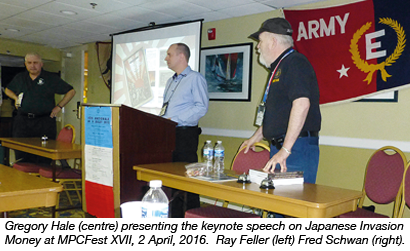 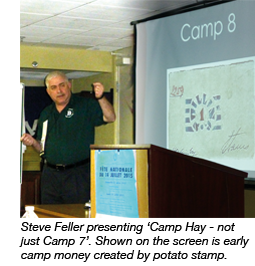 0800 - Auction. This was a highlight of the weekend with hundreds of lots donated by top dealers and going for very reasonable prices.

I ended up with a few interesting items, some I’ve yet to work out what they are, but overall very pleased with my purchases.

A few of the generous attendees even won items at the auction and gave them to me as gifts. I was also given some ‘secret’ CIA classified documents from WWII to research for the next edition of my book!

For anyone interested in Military numismatics, WWII and ephemera, the annual MPC Fest is a world-class event unlike any other. A great way to network with the leaders in their fields and build new friendships. 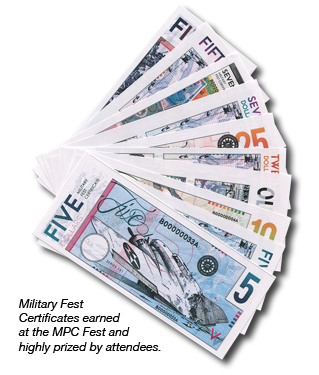 At the Fest, I was awarded a full scholarship to study at the American Numismatic Society’s Summer Series at Colorado Springs in June. I am truly humbled by their continuous generosity and commitment to furthering study in numismatics wordwide. 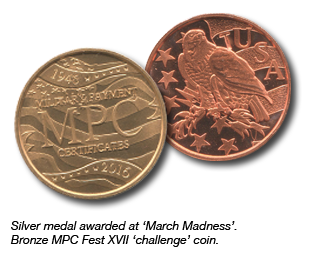