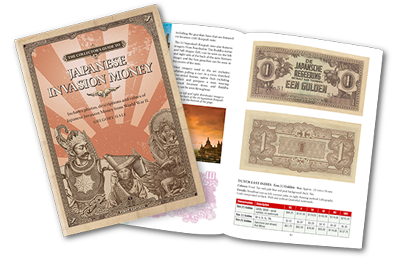 This 180-page full-colour volume does what it says on the tin and provides a thorough guide to the popular, and generally affordable, collecting field of Japanese Invasion Money (JIM). In addition to high-quality colour scans (front and back), the author provides a good deal of background information, contemporary newspaper articles and photographs, and occasional detail on propaganda notes, counterfeits and coins. A price guide for all notes is given, with grading following IBNS definitions and standards.

The Guide opens with Burma, the chapter covering the nine Japanese Government B-prefix issues (P9 - P17; TBB JG B1 – B9), as well as the four scarce Burma State Bank ‘peacock’ issues (P18 - P21; TBB BSB B1 – B4) of 1944. In addition to scans of the notes themselves, the information on each note gives dimensions  and a description of illustrations and watermark (this information is the same for all chapters in the volume). Serial number ranges are provided for the Japanese Government issues, as are details of the 5 rupee (P15) propaganda  leaflets and the 10 rupee (P16) British and US forces counterfeits. The 100 rupee note with watermark (P17b) is described as ‘very rare’ which, since it is readily available on eBay for only a few dollars, it clearly is not. While no information on Japanese Government  issue specimens is given (they are known for all denominations)  this information  is provided for the Burma State Bank issues.

The Dutch East Indies chapter covers the seven De Japansche Regeering (P119 - P125), two Pemerintah Dai Nippon (P126 - P127), and five Dai Nippon Teikoku Seihu issues (P128 - P132), for 14 notes in all. Notes from the first of these issuers are, barring particular serial numbers,  generally relatively easily to find, while some notes from the latter two issuers are scarce. All are S-prefix (for Sumatra). The final issue in the Dai Nippon Teikoku Seihu series (P133), believed to exist only in proof form, is not listed. Information on remainders and specimens is provided for most issues, as are details on the 1943-44 Dai Nippon 1, 5 and 10 sen coins. Serial number ranges are cited for all issues, though those for the 5 gulden (P124) would appear to be erroneous. Missing, however, is information on modern forgeries. This is an especial blight for collectors as far as the Dai Nippon Teikoku Seihu series is concerned and a ‘guide for the unwary’ would have been welcome.

The three remaining chapters can easily be reviewed together as they all deal with notes put out by the same, single issuer: the Japanese Government. These are the JIM notes of Malaya (M-prefixes, PM1 - PM10; TBB JG B1 – B10), the Philippines (mostly P-prefixes, P102 - P115) and Oceania (O-prefixes, P1 - P4; TBB JG B1 – B4). The latter circulated in the British South Pacific Territories.  In all these chapters, serial number ranges are provided for all issues, but details of specimens are given for Malaya and Oceania only. Also covered are Malaya $1 (PM5) and $10 (PM7) counterfeits, Malaya propaganda and souvenir issues, Malaya and Oceania replicas, Philippine and Oceania overprints and fantasies, the Malaysia 20 cent coin of 1942, and so-called ‘Australian yen.’ Though not usually considered a JIM note, the 1944 100 peso Central Bank of the Philippines issue (P116) is included.

No book is perfect and the Guide is no exception. My major quibble is the lack of any cross-referencing to Standard Catalog of World Paper Money (SCWPM) Pick numbers, or Banknote Book (Linzmayer, for countries so far published) and World War II Remembered (Schwan & Boling) catalogue numbers. These would not have been difficult to add to the useful ‘quick reference price guides’ which appear in each chapter and as an appendix to the book as a whole. Leaving aside the thorny question of their accuracy, the prices cited in these guides ought to have been rounded: a Dutch East Indies 10 cent specimen in UNC is, for example, quoted as $122.53. Notes in low-grade VG are generally priced at one-half to one-third of UNC, which strikes this reviewer as highly unrealistic.

A further issue is what is and what is not JIM. While there is no definition carved in stone, the Burma peacock issues and the Philippines P116 usually fall outside the remit. These are included in the Guide. Conversely, some collectors would regard as JIM the military notes of China PM1 - PM30. These are not included. This is a shame, because the information in SCWPM on these notes is scant and a well-organized chapter in the Guide would have made the volume even better.

The biggest question, however, is how the Guide stands up to the competition. The Guide loses to Schwan & Boling, but then almost anything would against what is probably, in the opinion of this reviewer, the greatest banknote book of all time. Schwan & Boling is, however, out of print, expensive when it can be found, and a veritable doorstopper with practically zero portability. Against SCWPM, the answer is simple. The lack of decent images, prices not updated for years and minimal information provided in SCWPM means the Guide wins hands down. Against Linzmayer, the Guide also wins. While Linzmayer provides excellent imagery, quality information and realistic pricing, no chapters are yet available for the Dutch East Indies and the Philippines (nor for China), which together account for around half of all JIM notes. Overall therefore, given its price, size and content, the Guide is to be recommended to all collectors with an interest in JIM or World War II notes.