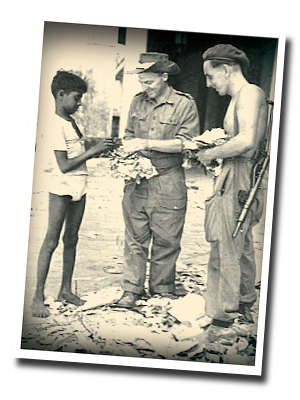 Japan invaded Burma in January 1942. Within a few months the aggressive Japanese Imperial Army had overtaken Mandalay and cut-off the Burma Road, the main supply route to China. This resulted in hundreds of thousands of people being displaced with some fleeing through the jungle to British India along with the British-Commonwealth-led troops.

In March 1943 new currency was released under the ‘puppet government’ and Dr Ba Maw. The inscription on the notes in Burmese reads ‘Burma State’.  Denominations include: 1, 5, 10 and 100 Kyats. 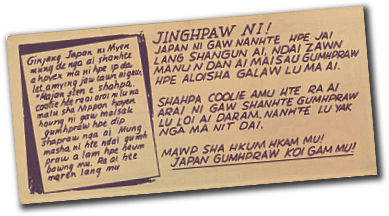 The United States created two 5-Rupee propaganda notes for use in Burma from 1942–1945. The one shown on left is written in Kachin language.

The American and British produced counterfeit Burmese JIM. The American Office of Strategic Services (OSS) working with U.S. Treasury and the U.S. Bureau of Engraving and Printing, counterfeited Burmese 10 Rupee notes. At the same time, the British Special Operations Executive (SOE) had their own counterfeit operation in full swing, producing Burmese 1 and 10 Rupee notes.

It is estimated that the SOE had printed approximately 1 million ten-rupee notes and 200,000 one-rupee notes.

Photo on right: Before the Japanese retreated they blew up a bank in Shafraz Road leaving footpaths on both sides of the road littered with JIM. Flight Lieutenant J. Dodd and Aircraftman W. Dimond (right) of the RAF Regiment collects notes as souvenirs with the help of a local boy. Rangoon, Burma. May 1945. (Photo from Australian War Memorial.)